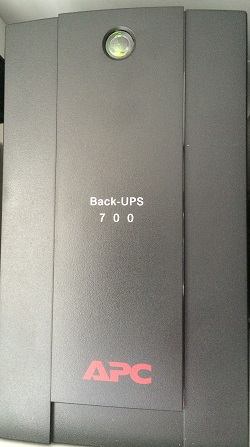 think about to protect my @home NAS with a UPS?

Initially I wasn’t keen on add a UPS to my home network. Clear it cost money and consume energy for what?

So why I go for that and start the next small project:

so let’s start what I’m going to do.

Well I think about to let serve two NAS from the UPS. My plan is to autoshutdown the first by the UPS  and second will be shutdown from the first via ssh issued shutdown command.

Configure autologin via ssh on local server, where ssh key is already present:

Now check if ssh login is working. You’ll login without been prompted to enter the password.

To select a UPS isn’t such easy as I thought. First I think about the requirements.

As the conclusion I go for Apc bakup ups 700va. Yes oversized, but I don’t know what I’ll add in the future.

Configure the UPS on OMV

The solution is simple and with a short skript fast to implement.

Setup a small support script to shutdown both NAS

I call the script ups_poweroff_nas.sh

On the local server I update the upsmon.conf file to call the new script and change the shutdown variable from

If you OMC mail is spammed by messages from nut that a mail can’t be delivered it might be releated to the fact that the weekly driver update can’t be done. As the issue is not new you can follow the thread discussion the solution or execute the following command to get the issue fixed.

Check as root if your update script is working properly:

Call the sed command to change the source:

Create the new generic.db and reload the configuration

I need a new power plug, because the UPS might consume a lot during recharging the battery. To be on the save side I put a 3.5kW power plug from Brennstuhl.

Add a 5 port trendnet switch to connect the 2 NAS and link it to the rest of the network.

Gap in the solution

Well the solution of shutdown the second NAS is just working when the NAS connected to the UPS is running. To fix this, I would need

Option is expensive as requires specific hardware, and option 2 I’ve no clue how to fix. So I choose the option 3. It’s the best solution in terms of cost and complexity.